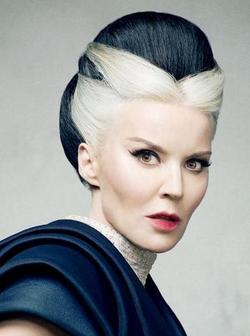 Valentina holds a stern coldness about her. She is always fashionable but most of her clothes she wears are in shades of black. When she does dress up, it's normally in something that's stunning and unconventional for a woman her age, but still classy. Her face does not have a lot of wrinkles, and she tends to wear makeup even on small outings out of her home. Her hair is always done up in an up-do and she always dresses her best. Her fingers are adorned with strange rings some appearing to be costume jewelry and she is always wearing a cameo necklace with a bird skull. Valentina is a very superstitious woman, citing her Romani heritage in things she does, or even referencing Grandfather Thunder when justifying her actions.

Valentina is the only member of the Triat still married to a garou of impressive rank. Her husband is Arkady Mirga, a Shadow Lord Athro Philodox that retired several years ago. She is the mother to three (including Kezia Mirga), and her family moved to Newberry Glen in 2004. She has been a member of the Triat since its founding, and known as an expert in kin rites.