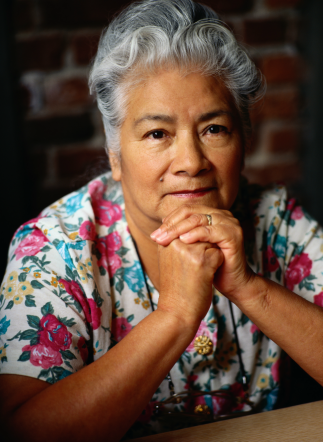 Physical Appearance/Distinguishing Characteristics:
Mrs. Núñez is a force to be reckoned with, a tiny, gray screech owl of a woman who's the terror of neighborhood children and dogs alike, and a devoted gossip who knows everything about everybody in town. Her diminutive height is inversely proportional to the size of her personality, which is comprised of equal parts outlandish humor, take-no-bullshit toughness, having high standards for everything (manners, dress, cooking, competence, you name it), being juuuuuuuuust a little bit racist when it comes to white people, and giving precisely zero fucks.

Despite her age, Juana is remarkably strong, the result of decades spent working as a nurse at St. Joseph Hospital in Eureka. Like her granddaughter Mitch, she's a snappy dresser, though her look is significantly more feminine. She's deeply loyal to her faith, family, and the memory of her late husband; to this day, she wears her wedding ring.